The House as Collective Unconscious

“…in mental life nothing which has once been formed can perish….Everything is somehow preserved and in suitable circumstances…it can once more be brought to light.”

– Sigmund Freud, Civilization and Its Discontents

When I was preparing to make DREAMS OF THE DEAD, I came across an analogy Freud uses to discuss how the past persists in our psyche in spite of lapses in our conscious memory.  He asks us to imagine the city of Rome, as if we could simultaneously see and experience every historical phase of its development.  He argues that within our psyches, it is as if no previous experience is erased – all of our history co-exists, simultaneously.  I was very much taken with this image, as I had been thinking about the house as being a kind of physicalization of the “collective unconscious” of our family.  I like the idea that all of our histories continued to hang in the air of that house, and that as each of us stood within it, we could replay potentially lost scenes of our lives. 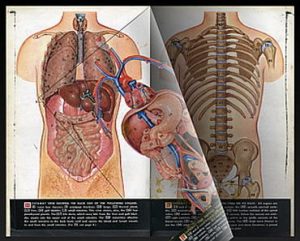 A similar image for me was that of an old-style anatomy book, with the clear plastic overlays that could reveal, either simultaneously, or in layers, the skeletal, muscular, vascular and other systems of the body.  I imagined the frame of the house, over-laid with all the strata of its history, visible simultaneously, or one-page-at-a-time.

When the house was being torn down, there was a pause in the proceedings where the half-demolished house was standing.  I was overwhelmed with a sense of simultaneity of past and present.  I could see the breakfast nook where I had eaten scrambled eggs with my grandparents as a small child, and later studied for my graduate seminars.  I could see the attic room that held treasures, like the gowns my mother wore in the 50s — and which in the 70s, I wore for playing dress-up. 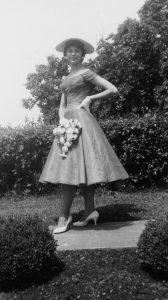 That same room was later my partner’s office, with his desk, a huge whiteboard for tracking ideas and a futon on the floor.  Afternoons spent there as a couple dreaming our future hauntingly coexisted in that moment with the days of childhood discovery of worlds beyond my experience.   But I am naming only small details that arose in my consciousness.  What I felt was more all-encompassing and awe-inspiring, as if in the wreck of the house, all of that history had been released, and it held me in its eternal presence.